We invited several of our Uyghur friends over for an Easter party, complete with egg dyeing and an Easter egg hunt – in our living room. 🙂

Whenever you get a group of Uyghurs together, it’s not a complete party unless there’s music and dancing. Our party was complete. 🙂

Below are the links to two of the songs that we played and sang at our party. As you will see, it was an interesting mixture of Uyghur and American culture. And they sure had fun using their cell phone cameras to videotape each other!

Today I attended a Noruz party with several of our Uyghur friends. Noruz is the Uyghur New Year, and it always takes place on the first day of spring. Yes, I know, today is April 1, and the first day of spring this year was March 20. However, this is Xi’an, not Xinjiang, and most of the Uyghurs who live here are students, far away from their home in Xinjiang. So they organize their New Year celebration whenever they can.

This particular Noruz party was held at Jiaotong University across town. When I first heard about the party, I just wanted to go see what it was like. But once some of my Uyghur friends knew that I wanted to go, they wanted me to not only come watch but also play my dutar for the party, and they wouldn’t take no for an answer! As if I tried very hard to say no. 🙂

I had attended several events like this while we lived in Kashgar, so I thought I had a pretty good idea of what it was going to be like. Nope, wrong assumption! The biggest difference that I found was that me and one of my Uyghur friends were the only two people who were wearing a doppa, a decorative Uyghur skullcap. That was a big surprise to me, since just about everyone who attended a party in Kashgar wore a doppa.

Another difference was that I, one of the very few foreigners attending the party in the midst of a sea of Uyghurs, was the only one who played a traditional Uyghur musical instrument. Oh, there were lots of songs performed, but all of the other songs were sung with an accompaniment track (think karioke), no live instruments. Maybe the circle of friends that I had in Kashgar were more musical than most, but I don’t think so.

Since we arrived several hours early, we decided to take advantage of the beautiful weather and practice outside on the grass. It wasn’t too long before we attracted a small crowd of Chinese students who wanted to listen to the Uyghur music. It was interesting in an amusing kind of way to overhear some of their comments, “Are they all Uyghurs?” “I don’t know.” “I think maybe the old one (referring to me) is a foreigner.” “No, I don’t think so.” The same thing happened when we went to a small restaurant on campus for dinner. Most people just assumed that I was a Uyghur. 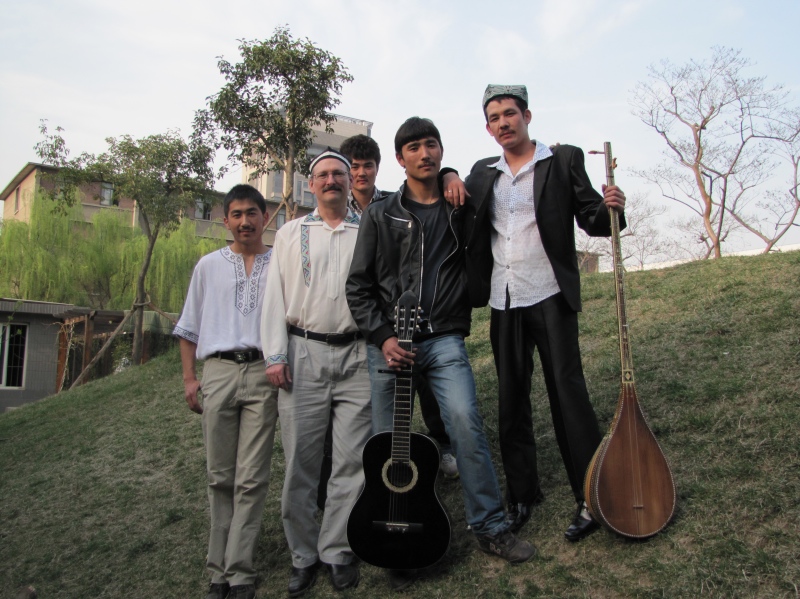 It’s hard to describe what I was feeling during the whole day today. For pretty much the whole time that we’ve lived in China, one of the most difficult things to bear, day in and day out, is the fact that I’m always seen as the different one, the foreigner. Most days it’s not a big deal, I can make a joke about it with kids who point at me and say, “Lao wai!” (old outsider, meaning foreigner). I sometimes point right back and say with a smile, “Xiao nei!” (little insider). But sometimes it gets to you, and you just yearn to fit in.

Today, I felt like I almost fit in with my Uyghur friends. Almost.

Today in my Uyghur language lesson my tutor was teaching me how to say the body parts of animals that humans don’t have, like hooves (tuyakh), horns (munguz), etc. When he taught me how to say wings (khanat), he also told me about a Uyghur saying:

Directly translated into English, this sentence is:

“His wings and feathers have grown.”

I wouldn’t push the analogy too far, though. Unlike some birds, I don’t think many Uyghur parents would actually push their son out into the street, just because he’s become a man!

Tonight I went with a Uyghur friend to a restaurant on the other side of Xi’an that was supposed to have good Uyghur food. The food turned out to be okay, but the company was great.

As we discussed many different topics, he told me about a traditional Uyghur holiday called Choka Tal Festival. This festival takes place around the time when the willow trees put out its new growth in long slender switches, called “tal” in Uyghur. Apparently, the way the Uyghur boys celebrate this festival is that each boy breaks off one of these long switches, goes to find the girl he likes, and proceeds to whip her with the switch!

Obviously, since the switch is new and tender, it doesn’t hurt at all. After all, it’s supposedly intended to be a way for the boy to show the girl that he likes her. My friend told me that he distinctly remembers the first time that he did this, when he was in junior high. After he expressed his admiration to the girl he liked, she went out, found a bigger switch, and proceeded to beat him with it! He said, “The first time I tried, and I failed miserably!” 🙂

Hmm…maybe he should have woven the switch into a circle and given it to her as a wreath to put on her head instead of beating her with it. But then, you never know. Maybe she was just returning the admiration!

A young Uyghur girl studying at a nearby university has pretty much decided that Wendy and I are her surrogate parents here in Xi’an. She tells me that I look like her father (I’ve seen a photo of him; hmm…); she gave me soup that she had made herself when I was sick; she gave me medicinal tea from her home (near Kashgar).

Her Uyghur name means “princess” and she treats me like a king!