The Chinese educational system is…interesting, to say the least, when it comes to scheduling holidays. Wednesday of next week is the traditional Chinese holiday called “Qing Ming Jie” or Tomb Sweeping Festival, when Chinese people go to the tombs of their ancestors, tidy up the area around the tomb, and pay their respects to their ancestors.

The government has decided to give students a 3-day holiday – Monday through Wednesday – to celebrate this important traditional holiday. However, for some reason unbeknownst to every foreigner that I’ve talked to – and many Chinese as well! – the government has also decreed that the Saturday and Sunday before the holiday, classes will be held to “make up” for two of the days of the holiday.

When our team was invited to sing at the Foreign Languages Department Christmas/New Year’s Program, I envisioned past programs that I had participated in, where the foreign teachers were asked to sing. Sometimes it was fun, with everyone just wanting to have a good time to celebrate the end of the semester. (Yes, they may have called it a “Christmas” Program, but the purpose was not to celebrate Christmas!) Sometimes it was built up into a massive production where the presentation became much more important than having fun. 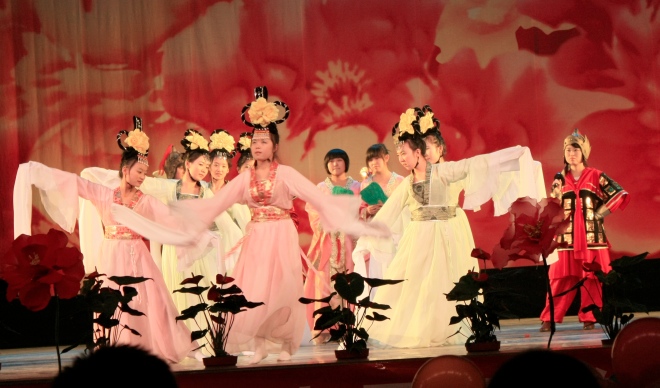 In the midst of all the flash and glitter of the students’ performances, our team sang “Silent Night” to the accompaniment of my guitar and Wendy’s flute. What a contrast! 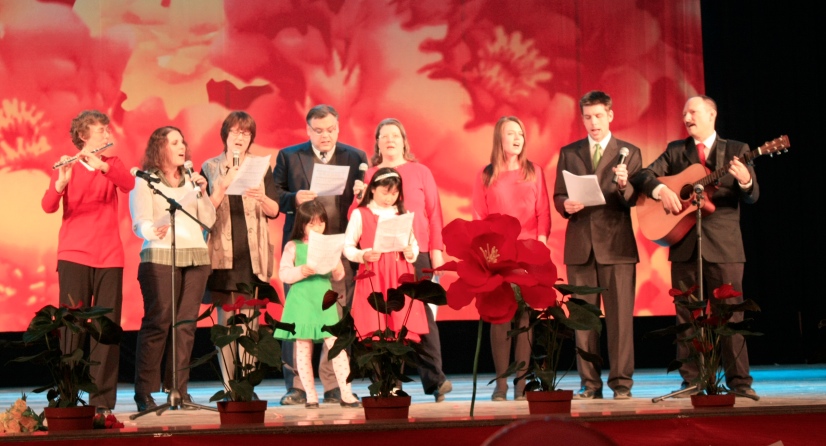 Since we sang it in both English and Chinese, the packed audience understood the words, and because of some comments made after the performance I’m sure the contrast between the frenetic performances of the students and the peaceful song by the foreigners was not lost on the audience.

I had a great language experience this morning. I went to the ATM on campus before 8 am to withdraw money for the health check that we needed to get in order to renew our visas (that’s another whole story!), and on the way back I was walking along the sidewalk when I saw a little girl walking toward me. She was probably in 2nd or 3rd grade, obviously on her way to school. She glanced at me and then looked again when she realized I was a foreigner. I was expecting the usual nervous “Hallo!” thrown at me after having safely passed me by, like most Chinese children do.

However, this little bundle of joy looked up at me as she got near, grinned at me, and with a twinkle in her eye gave me a cheerful, “Hi!” I was so surprised by her oh-so-appropriate greeting that I almost forgot to say “Hi” back. Almost. And I certainly said it with a grin on my face!

Yep, someone’s doing their job right in English class wherever she goes to school!