My son Ian is currently on vacation between contracts as manager of a photography team on a cruise ship. He’s spending this vacation in the U.K. visiting his girlfriend’s family. They recently took a trip to Stonehenge. What a great photo op for a photographer! 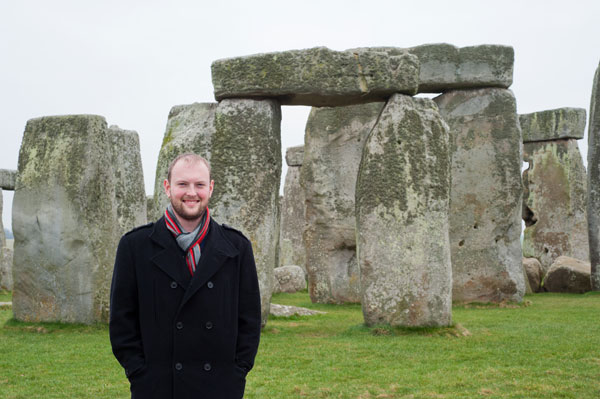 Yep, I’ve rejoined the ranks of the bespectacled. After having to wear glasses for over 30 years, I had LASIK surgery about a dozen years ago so that I didn’t have to wear glasses any longer. But even before I had the surgery the doctor warned me that the effectiveness of the surgery might be limited, since I had the surgery when I was 40. I was told that about that age people begin to experience a deterioration in the elasticity that allows your eyes to change focus from a near object (a book) to a more distant object (an oncoming car).

That turned out to be a pretty good description of what happened with me. A couple years ago I began to detect an increased blurriness when I looked at distant objects, like that oncoming car! The blurriness got worse and worse until last year I began to wonder whether it was safe for me to drive! It was definitely time to get my eyes checked out. So yesterday I went to an optometrist here in Chiang Mai and got fitted for a pair of glasses.

Well, at least I had a dozen years of freedom from wearing glasses. And even now, my glasses are nowhere near as thick as they used to be before I had LASIK. So I guess I’m still enjoying the benefits of the surgery, even though I once again have to wear glasses.

The funny thing is, one of the newest fads that seems to have swept the ranks of Chinese college students back in Xi’an is wearing a pair of glasses without any lenses. Yep, just the frames, and the brighter the color, the better. Hmm…maybe I should have gotten those pink frames…