I should have known not to make any assumptions. This time it was a whole host of assumptions regarding the purpose of a college choir. I was thrilled at the beginning of this semester when I found out that I would be conducting two classes of choir in the School of Music, rather than teaching English classes. Don’t get me wrong – I really enjoy teaching English. But I LOVE teaching music! So when I found out I would be conducting the choir, I was in seventh heaven, especially when they told me that they wanted me to teach English songs and to teach the class using the same methods that I would with a choir in the U.S. Then reality began to set in.

Over the course of the first couple months I slowly learned, bit by bit, that a college choir here is NOT like a college choir in the U.S., at least not the many choirs that I have been involved with. To begin with, I was a little puzzled as to why four different classes of students – for a total of over 100 – were put together to form the Sophomore choir, and another four classes to form the junior choir. The fact that these two massive choirs met only once a week each for two hours was a little frustrating, but I figured I just needed to work with the system and do the best I could to get ready for a semester-end concert.

Shortly after classes began, WAY more students than I had expected were skipping class, week after week. When I mentioned this to the faculty member who had been assigned to assist me, she basically told me that it was a common occurrence in all classes, and I should just grade them down when they skip class. To say that I was surprised would be an understatement! How could a choir adequately prepare for a concert when a quarter of the students don’t show up for rehearsal?! She then told me that the choir class was a required class for all students with a Music Ed. major or a vocal performance major. A choir that was a required class! For five semesters! No wonder so many students skipped class. They didn’t want to be there!

When I asked the dean about organizing the concert and he gave me a puzzled look, I knew we had once again somehow crossed wires. When I then asked him if there was an expectation that the choir would give a concert anytime during the semester, his answer was, “You’re the conductor; you decide!” Hmm…definitely not the answer that I was expecting.

So, choir rehearsals once a week…required class filled with students who are required to attend and don’t really want to be there…no expectation of a concert…I was beginning to piece together a picture of a choir vastly different from the choirs I was familiar with.

In spite of this, I still wanted the choir to perform, because there was still one last piece of the puzzle that I didn’t find out about until after the concert was already scheduled. This last piece of information was that, unbeknownst to me, the choir class was intended to teach the students how to conduct. (A methods class of over 100 students brings up a whole host of other issues!)

It was too late by this time to cancel the concert without harming relationships with several different people who had helped to take care of many of the details in arranging the concert – scheduling the concert in the frequently-used campus concert hall; making posters; putting together an ad for the campus radio broadcast; making a banner that would be displayed during the concert; making concert programs; and last but certainly not least, two faculty members – a flautitst and a cellist – who had agreed to accompany two of the songs. So the show must go on, even when it appeared that the choirs were nowhere near ready to perform!

Oh, was I ever mistaken! They sang the songs for the concert better than they had ever sung them in rehearsal! What an enormous relief!

I wasn’t the only one pleased with their performance. The dean of the school of music, who was in the audience, came to me after the concert and was effusive in his praise, “That was wonderful! I can’t imagine how you were able to get the students to perform like this after only a little more than three months! You must do another concert next semester!” My first thought was, ‘I’m just as surprised as you!’ 🙂

Well, the pressure’s on now. I better go figure out what we’ll do next semester! 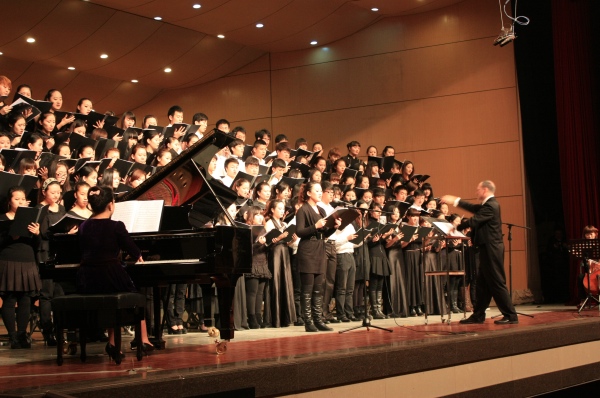