I had a great language experience this morning. I went to the ATM on campus before 8 am to withdraw money for the health check that we needed to get in order to renew our visas (that’s another whole story!), and on the way back I was walking along the sidewalk when I saw a little girl walking toward me. She was probably in 2nd or 3rd grade, obviously on her way to school. She glanced at me and then looked again when she realized I was a foreigner. I was expecting the usual nervous “Hallo!” thrown at me after having safely passed me by, like most Chinese children do.

However, this little bundle of joy looked up at me as she got near, grinned at me, and with a twinkle in her eye gave me a cheerful, “Hi!” I was so surprised by her oh-so-appropriate greeting that I almost forgot to say “Hi” back. Almost. And I certainly said it with a grin on my face!

Yep, someone’s doing their job right in English class wherever she goes to school!

For those of you who are interested in exploring the wonderful world of Chinglish, you should know that it’s taking Broadway by storm. Well, okay, maybe not by storm, but there is a new play on Broadway titled “Understanding Chinglish” that shows what happens when Chinese is mis-translated into English, frequently with humorous results, humorous, at least, to native English speakers. If you’re interested in reading more about this play, here’s the link:  http://www.bbc.co.uk/news/magazine-15471753

Not everything is peaceful in the city of Western Peace. Yesterday I saw my first Chinese demonstration. No, it wasn’t a cooking demonstration. It was a group of middle-age Chinese people demonstrating in the middle of the street, including a large banner that said

These were well-dressed, middle-age, middle class Chinese people who were obviously upset about something, most likely their forced relocation due to the demolition of their apartment building. (Remember Chai Na?) No, not all is peaceful in the city of Western Peace.

But then, do you know of anywhere on earth that is always peaceful? Nope, I don’t, either. I guess I’ll stick around here a while and see what I can do to bring a little more peace in this corner of the globe. How about you?

(Conversation in Chinese between me and a taxi driver)

Me: (Looking at all the new buildings going up in Xi’an) Xi’an sure is developing fast.

Driver: Yeah, you see all that new construction? You know what happens before new buildings go up? Old buildings have to be torn down. You know how to say “China” in English? “China”, right?

In Chinese, the character

, pronounced “Chai”, is painted inside a circle on buildings that are marked for demolition to make room for newer buildings. “Chai” means to demolish. 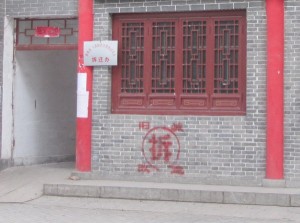 The additional “na” after the word “chai” gives the word added emphasis. So the taxi driver was basically using the English word “China” to make a joke – black humor, considering all the people that get displaced when an old building gets demolished, but a joke nonetheless – about all the demolition that’s happening in China to make room for new buildings.

You’d think that after living in China for 15 years I’d be used to certain things. For example, traffic flow. I’m not just talking about motorized transportation here; I’m especially referring to pedestrian traffic, since I don’t do a whole lot of driving in China. As in, zero.

Anyway, it appears that, judging from the level of frustration that I’ve been experiencing recently, three years of living back in the U.S. has re-programmed my expectations in this area. Here’s a graphic to illustrate the cause of my frustration:

The blue on the left represents the Western way of dealing with problems – we walk right through them. We deal with them, we “solve” them.

The red on the right represents the Chinese way of dealing with problems – they avoid them, walk around them, ignore them.

Of course, these two representations are generalizations, and as we all know it’s dangerous to make generalizations. However, based on my experience of the last couple months, I’d say it’s pretty accurate, at least in the area of pedestrian traffic.

In the U.S., we have an unspoken rule that everyone is supposed to walk on the right. We have another unspoken rule that says if you want to stop and deal with something, you do it out of the flow of traffic so you won’t hold everyone up. This probably has a lot to do with the fact that U.S. culture is so much of a car culture, and we subconsciously apply the rules of the road to the sidewalk.

In China, it wasn’t even legal to privately own a car until the mid-90’s! So don’t even think about a car culture. No, it’s a pedestrian culture with millions and millions of drivers now applying the unspoken rules of the footpath to the highways. In other words, if you’re in front, you have the right of way, even if your bumper is 3 inches further in front than my bumper. So you can crowd into my lane, and I’ll just crowd into the lane next to me to make room for you crowding into my lane. And if I need to get to a road that’s not directly accessible from the road where I’m driving, I’ll just turn into the oncoming traffic to get to the road I want to get to.

Fortunately, as I said before, I don’t drive in China, so I don’t have to deal with this type of driving. However, the most common place to observe the Chinese version of the above graphic is on the sidewalk. There’s no such thing as walking on the right, or moving slightly out of the path of traffic if you want to stop.

And the worst part is, I know it’s my problem, not theirs!